Anjelika Washington is shedding light on the racism that still exists in Hollywood with an Instagram photo standing side-by-side with a woman wearing blackface in order to be the young actress’s stunt double. 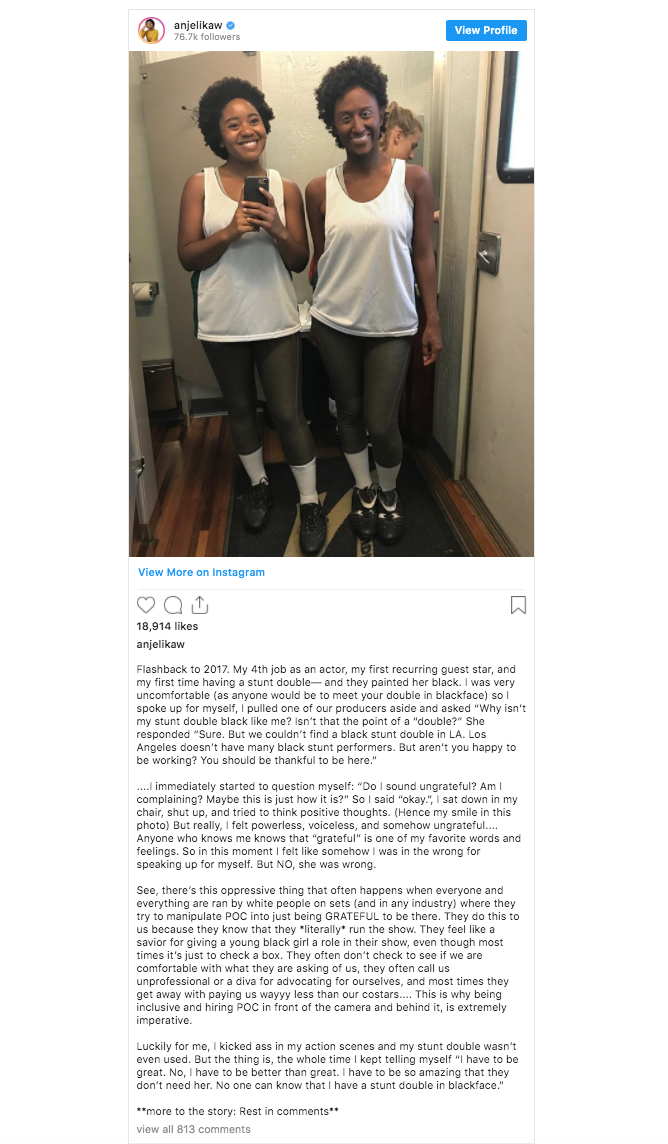 “Flashback to 2017. My 4th job as an actor, my first recurring guest star, and my first time having a stunt double— and they painted her black,” the Stargirl actress wrote.

The 22-year-old went on to share how “uncomfortable” she felt when seeing the double. But when she asked a producer why a Black woman wasn’t cast instead, the producer allegedly told her “we couldn’t find a black stunt double in LA” and told Washington to “be thankful to be here.”

“I immediately started to question myself: ‘Do I sound ungrateful? Am I complaining? Maybe this is just how it is?’ So I said ‘okay,’” Washington wrote. “I sat down in my chair, shut up, and tried to think positive thoughts. (Hence my smile in this photo) But really, I felt powerless, voiceless, and somehow ungrateful.”

In the post, the actress went on to say that it wasn’t the last time that she, as a Black woman, had been made to feel ungrateful while working in the entertainment industry. In fact, she said an emotion that people of color are often made to feel when bringing up similar concerns.

“They do this to us because they know that they *literally* run the show. They feel like a savior for giving a young black girl a role in their show, even though most times it’s just to check a box. They often don’t check to see if we are comfortable with what they are asking of us, they often call us unprofessional or a diva for advocating for ourselves, and most times they get away with paying us wayyy less than our costars,” she wrote. “This is why being inclusive and hiring POC in front of the camera and behind it, is extremely imperative.”

In this instance, in particular, Washington said she made sure to nail all of the stunts so that the double wouldn’t even have to be used. She went on in the comments section of the post about how this incident is just one example of a Black woman having to be “TWICE AS GREAT than a white woman to get HALF the opportunities, HALF the pay, and HALF of the recognition.”

While she’s experienced both microaggressions and macroaggressions at work, the actress says she has “always spoken up.” However, there are days when she hasn’t felt like taking the time to educate those around her and exerting energy for a confrontation. Now, she vowed to never let that happen again.