Many firearms users aren’t aware that the United States government has willfully placed its citizens in a conflicting position, and essentially is violating their rights, by still technically  prohibiting any lawful marijuana user (per their state law), from owning a firearm.

On the federal level, marijuana is still illegal, and it’s a felony punishable by up to 10 years in prison to smoke pot and buy or own a gun. State law unfortunately, does not create a defense.

The Bureau of Alcohol, Tobacco, Firearms and Explosives (ATF) has not changed its position on marijuana since it sent a memo to gun dealers in 2011 to warn that they are prohibited from selling guns to marijuana users, regardless of state law. Anyone who uses marijuana “is prohibited by Federal law from possessing firearms or ammunition,” the memo states.

To purchase a gun from a licensed seller, buyers must submit a sworn statement that says they don’t smoke marijuana. The mandated paperwork, known as Form 4473, asks prospective buyers, “Are you an unlawful user of, or addicted to, marijuana or any other depressant, stimulant, narcotic drug, or any other controlled substance?” The question is accompanied by a disclaimer: “Warning: The use or possession of marijuana remains unlawful under Federal law regardless of whether it has been legalized or decriminalized for medicinal or recreational purposes in the state where you reside.”

Lying on the form is a felony punishable by up to 10 years in prison.

In 2016, the U.S. Court of Appeals for the Ninth District upheld the federal government’s ban on gun sales to marijuana users.

Already this year, the ATF has arrested at least one Detroiter for possessing a gun while being a marijuana user. On Feb. 6, a federal grand jury indicted Mytez Powell, of Detroit, on a felony count of unlawful use of a controlled substance in possession of a firearm. Powell, who faces up to a decade in prison, was arrested after posting videos and photos on Instagram and Facebook that showed him smoking a blunt, and on different occasions, holding a pistol. An ATF agent took action after Detroit police spotted a 9mm pistol in the backseat of a car in which Powell was a passenger.

In one video, Powell is brandishing a pistol “with what appears to be a blunt wrapper and marijuana on a license plate which reads “HIGH AF,” court records indicate.

Gina Balaya, a spokeswoman for the U.S. Attorney’s Office in Detroit, says the law applies to people who are regular users of any controlled substance, including marijuana.

The Federal Gun Control Act of 1968 and the Federal Omnibus Consolidated Appropriations Act of 1997 make it illegal for a person who fits into any of the following categories to ship, transport, receive or possess firearms or ammunition. These laws prevent a state from issuing a concealed carry license/permit as it would be illegal for people who fit in these categories, by federal law, to own or possess a gun.

18 USC 921 (a)(33)(B) – Exceptions
(ii) A person shall not be considered to have been convicted of such an offense for purposes of this chapter if the conviction has been expunged or set aside, or is an offense for which the person has been pardoned or has had civil rights restored (if the law of the applicable jurisdiction provides for the loss of civil rights under such an offense) unless the pardon, expungement or restoration of civil rights expressly provides that the person may not ship, transport, possess or receive firearms.

Federal law prohibits medical marijuana users from possessing or buying firearms and ammunition — even if state law allows the drug’s use. An individual can’t have both licenses. Under federal law, any marijuana user is an unlawful user of a controlled substance. The 9th Circuit Court of Appeals has upheld this rule. Marijuana in any form is illegal under federal law. Users of marijuana are prohibited persons. Checking ‘no’ on question 11(e) on the Form 4473 might considered a lie if you use marijuana, which is still technically a federal offense. See this ATF letter on the topic. 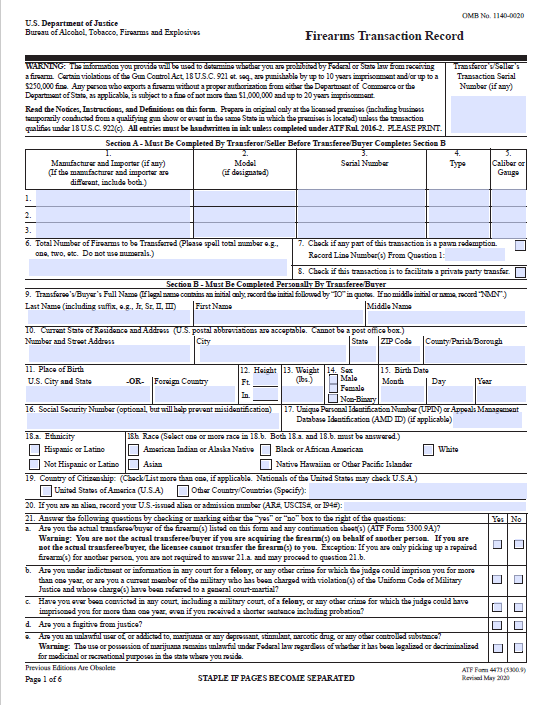 A federal law enforcement official who spoke on condition of anonymity tells Metro Times that cases like this are rare and are usually investigated because more serious crimes are suspected.

Steve Dulan, an attorney and chairman of the Michigan Coalition for Responsible Gun Owners Legal Foundation, tells Metro Times it’s “absurd” that residents must choose between smoking pot and owning a gun. He worries about the prospect of a “hardcore anti-drug prosecutor” charging residents for exercising their second-amendment rights to own a gun while using a substance that is legal on the state level.

Whether or not prosecution is rare, the prospect of getting charged “is very real in terms of scaring and deterring people,” says Dulan, who teaches gun law at Cooley Law School.

Dulan, who does not use marijuana but supports people’s right to use it, says the conflicting laws may pressure people to lie on the federal form to buy a gun.

“We are living in a world where people are encouraged to lie because of the system, and that is a really bad thing,” he says.

“When you have too many laws, it erodes respect for the law.”

“The politicians at the federal level have to grow the guts to deschedule marijuana,” Dulan says.

Morris agrees: “The only way this is going to change is when the federal government legalizes or deschedulizes marijuana.”