Payment company PayPal has already began it’s seemingly unfounded governance of people’s funds, by freezing the account of a user after he carried out about ten transactions with cryptocurrency in a week. Not an illegal action, but simply something PayPal (known for overstepping and mishandling user’s funds and accounts).

In 2017 PayPal paid a $4,000,000 settlement from a lawsuit between PayPal and its users over unexplained account closures, ending six years of soap opera-style negotiations.

She also granted class counsel’s fee motion in part, and rejected a separate motion for fees by another attorney who she said had “derailed” the settlement talks.

Under the agreement, PayPal will pay $4 million, modify the disclosure of its reserve and hold practices, and clarify its dispute resolution process.

Lead plaintiff Moises Zepeda sued PayPal in 2010, claiming he logged into his PayPal account, which he used for business, and found a notification that his access to it had been limited. PayPal then closed the account, explaining only that the closure was due to security. It also kept the money in his account and the interest from it, Zepeda said.

Another user, Devinda Fernando, filed a similar lawsuit that same year against both PayPal and eBay, claiming the two companies improperly restricted and closed customer accounts without notice due to suspicious activity.

Now, according to the Reddit user TheCoolDoc, the system believes the account has been used for “item sales” worth $10,000, while the user claims he just “bought/sold $10,000 worth of crypto throughout the week.” As confirmation, TheCoolDoc submitted to PayPal his personal data as well as his ID and information about each transaction marked as “PayPal Crypto.”

However, the system has blocked the account “due to potential risks” and has frozen the remaining $462 in the account for 180 days. Another Reddit user has also reported he is having problems with PayPal’s new crypto service: “It took them a nerve-wracking week before they finally agreed to release my funds. I’ll never use PayPal again.” A user has suggested that the measures taken by PayPal could be due in part to the fact the company loses money on large user transactions.

According to him, PayPal is not a crypto exchange, but a service “more like a bank account.” PayPal launched on November 12 a service for US clients that allows them to buy, store and sell Bitcoin, Cardano, Ethereum and Litecoin. 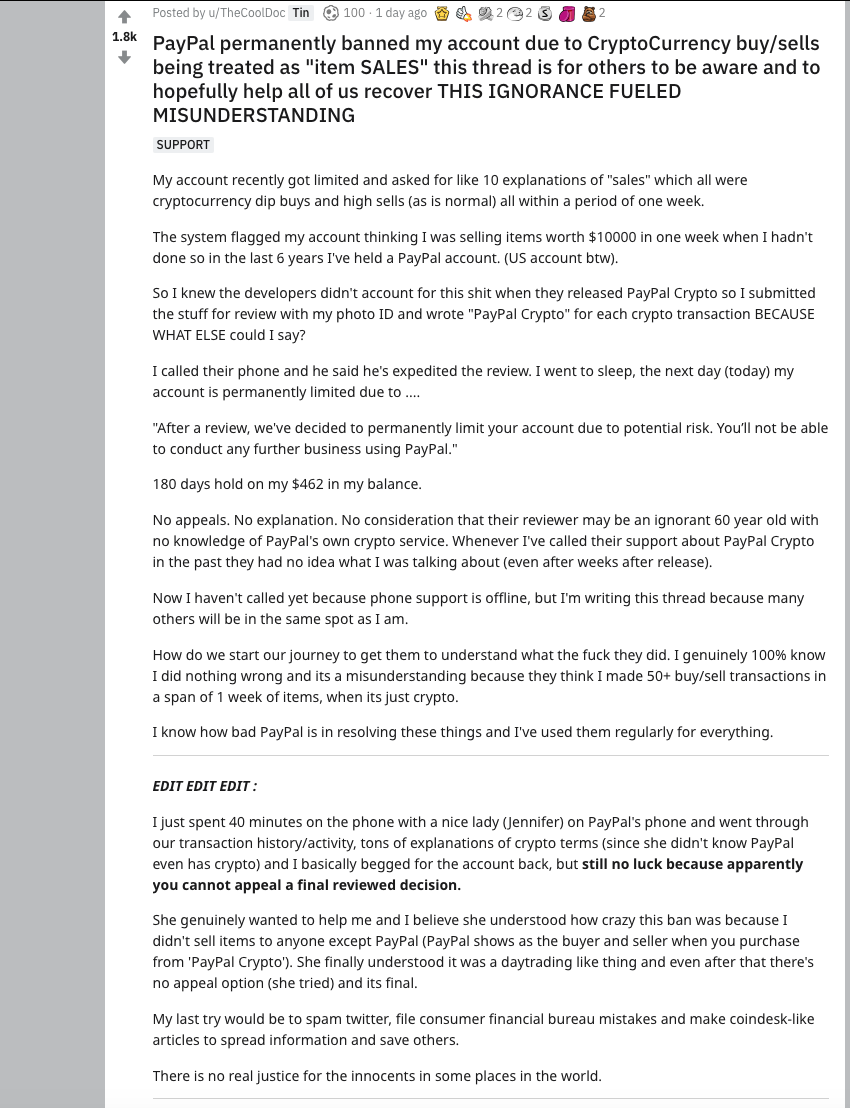